We have an all star line up of Familiars in the Mythic Arena! Who is your favorite familiar? Who will you pick for your team? Find out a little bit more about each character below!

Coming from the Celestial realms, this is no ordinary unicorn! Gifted with the power of healing touch, he makes an excellent support character in the Rear or Guard lines. Even though he may be a little shy in battle, he’s loyal without fault, and will never let you down! Well..not intentionally…

“Hey guys, you like carrots? I like carrots. And apples too, yeah apples. Got any apples? Wha-oh say something about the Mythic Arena? Oh, um yeah it’s kinda scary for me, but I know my friends need me so I’ll do my best!”

This alpha wolf is a true team player, gaining confidence and power when more of his companions show up in the arena. And even though he may sometimes arrive late in the game, don’t worry; when he does he doesn’t mess around and comes in paws a blazing!

“My teams are the best around. We’ve got what it takes to win and aren’t going to let a loss here and there bring us down! Let’s do this!”

The oldest out of all the Familiars, this hardened croc has seen more battles and tournaments than any other. And it shows in his tough hide and armor penetrating teeth. It’ll take more than a few hits to stop this guy!

“These youngin’s are full of spunk. But it takes more than all that energy to take down some of those bad boys. I’ve been battlin in these here arenas since before you was born!”

He may be caught “training” by chowing down on precious Elyth stones in his free time, but don’t let that fool you! This wild pig can shake the ground up charging on through, and will knock your teammates over in battle with barely a fight!

Crunch crunch… Mmm…I love the green and red gems the best..crunch… I mean, if someone puts out a Topaz Health Gem I’ll eat it, sure, but mmmm.. crunch.. you can’t beat these Regen and Power Stones. Sooo tastey!

Creating a spark wherever she goes, the fiery phoenix, Ember Wing, will heat up the battle, burning every familiar in a row with a touch of flame! She can dodge past your front line, and even return from what looks like certain defeat!

“We’ll get them together team! I’ll fly over and flame the guard line while you others get those in front. Then I’ll use my blazing talons and—ouu! Oh I’m sorry, I didn’t mean to catch your tail on fire again Huang, it’s just you were standing awfully close–oh sorry too Thunderhoof! >.<…. 🙁 ….I’ll just go over by Sir Edmund, he can’t get burned.”

Watch out for this sly little monkey. The master thief, he’ll steal any of your Elyth and use them for himself! Always up to no good, he can also sneak around the battle field and bite someone in the back lines!

“Ehehehe, why that’s a pretty gem! Be a shame if someone…stole it from you xD hehehe…”

No one knows too much about this mysterious fellow. He’s a scorpion of few words. Never underestimate him in battle however, that thick carapace and those sharp claws can be deadly..and poisonous! Achrab, might you have anything to say to our audience, perhaps tell a short tale of your battle experience?

Have you heard of the legendary Water Horse? This ferocious, man eating beast will come at you from the turbulent stormy waters where she calls her home. She–“

“A-ahem, ferocious “man-eating” beast you call me? Do I look like a Kraken or some giant squid to you?”

Oh, I was just telling the audience of your fearsome–

“You shouldn’t make exaggerated statements like that. It will give people the wrong impression. Why don’t you tell them of my vast cultural and artistic talents instead? Why is it always about battle? I enjoy playing the harp, painting in watercolors…”

Well I, uh, just meant that you attack with vicious–

And so begat Charlie….

-Aelwen, Queen of the Ceffyl Dwar…. and Charlie, just a plain old horse… that she can turn you into. Don’t make her mad!

Valtharax, the fiery ruby dragon from the desert. Who can stand up to his immense size and aggression? His flaming sulphuric breath will leave you scorched and running from battle (and not just from the flames if you know what I mean-phew!) Valtharax, can you tell us about your strategy during that last match?

“Oh last battle? It was nothing. I took the first 2 down myself. With one claw! It wasn’t until that mangey Silverpaw got there…arghh…I get mad just thinking about it! He doesn’t fight fair! That @#$#% wolf! Next time I’m gonna %$#&@ slash him and ^%&*# burn him to bits! If he think he can stand in my way again, NO one can stand in my way!! RAWRR!!!

Living in the evergreen forests, surrounded by magical Elyth crystals, Astaryan draws upon their healing powers to give herself extra endurance during battle. This emerald dragon can breathe acid on you and your allies, and cause flesh to corrode from a touch of her scaly hide!

“Emeralds are beautiful aren’t they? They’re the same color as I am. So of course that’s where they get their beauty. Oh I do love rubies too, the color of Valtharax. That strong, handsome dragon. Green and red are complimentary colors you know. They would would be a powerful match together….the um, gemstones I mean of course.”

-Astaryan, Keeper of the Grove

Whoosh!…did you see that? Oh there he is! That white stag is easy to miss, he runs through the forest and blends in with the snowy woodlands he calls his home. Solace, wise and noble stag, can you impart to us some words of wisdom on your battle tactics in the arena?

“My dear fellow, it’s quite simple. If you see something large and powerful coming at you, dodge out of the way. If a ball of fiery dragon breath is burning straight towards you, make a run for it. If thunder and lightning rain down, well don’t just stand there and take damage, a slight move to the right or left will save you, or exchange places with another team mate if you can.”

“Ssso… you want to learn some real wisdom and knowledge about battle? Then you’ve come to the right place. First, don’t listen to that sstag, Sssolace. He’ll only get you taken out. You must intimidate your opponent by staring them in the eye, don’t back down, and using your most powerful abilities against them! Crush them so they can’t move and make them tremble with fear!!!”

Strong, dark, and mysterious with a hint of boldness. I’m not talking about coffee, I’m talking about Eclipsion! The mare made from the fabric of night time terrors! Devoid of all color, her velvety obsidian coat is pure black like her soul! And let’s not forget the fiery flames that shoot up from her hooves–watch out!

“What do you want? I’m busy. Tryin to make it to the next level here. And what’s wrong with black? It’s my favorite color.”

Mimick! There you are! I’d been looking all over for you…and finally, seeing your true form.  Wow, you’re a big blue parrot, I’d never have guessed!

Tauros! Mighty bull of the deep forests, who…

“7? You mean 8!”  Snorts loudly and starts stomping his hoof

And when he sees his opponent in battle, he wastes no time and…

Whew….breathes heavily …boy it took me a long time to climb up this mountain. Ilios, don’t you get lonely up here on this mountain peak, all by yourself?

“No, I like it up here. No one’s going to bother me, it’s nice and quiet. Besides, see these big wings? I can dive down from here and in a matter of minutes be on the ground if I want, or fly to the ocean, or swoop through the forests. The sky takes me wherever I want to go!”

-Ilios, Lord of the Sky

Um..hello?… walks into the forest, trying to avoid spider webs or anything…creepy looking..…Goliath, are you here?

“Hey there, friend! Welcome to my home!”

“No don’t go! I just…I didn’t use my deadly touch or anything, don’t worry! That’s just for battle…I…. sighs…Why is it so hard to make friends?” :S

-Goliath, Lurker of the Wood

Good day to you sir, Huangdi. What an imperial sounding name! Can you impart some of your great battle tactics to us?

“So picture it: the jungles of Ea, mists from the early dawn still layering the ground. And there I was, on the hunt for days,w for the beast that no one else could take down. Then I spotted him from afar. Silently I stalked him until I was within one tail’s length. Then, I pounced into the air and took him down, with just my left front claw!”

Wow that is an incredible feat! You took him down by yourself, with one claw? I mean those claws do look mighty sharp but…one claw?

“Do you doubt my battle powers? I didn’t rise to this position and gain the respect of my comrades for nothing!”

Thunderhoof, the beautiful magnificent pegasus. She can fly through storms with the greatest of ease, and even bring their powers into the Arena with her! Tell us Thunderhoof, what is your secret, how do you do it?

“There’s really no secret, the storms never bothered me, in fact it feels exhilarating flying through them, energizing! These powers come as naturally to me as breathing fire comes to a dragon.”

They said the great Golden Bear of the mountains was a myth! But we know better. They exist, and the greatest among them is named Golden Claw, ferocious beast of the mountain kingdom in which he lives! Tell me, how did you gain the respect to become king, Golden Claw?

“Huh? Well look at me. I’m huge. I mean, who’s gonna mess with someone of my size? And if they do, I just grab them in a big bear hug like this…”

“Oh sorry, didn’t mean to do that so hard. Sometimes I just don’t know my own strength, haha! Oh and if that doesn’t work, I just take my great big claw here and swi–“

Jumps backwards quickly. No, No that’s ok, you don’t have to show me! I get it, I get it!

-Golden Claw, King of the Mountain

A fun, casual card game for 2-5 players where you compete to build the best pies! Read More » 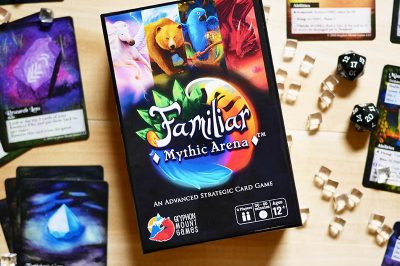 Familiar is an advanced strategy card game for 2 players featuring magical familiars that you battle against your opponent in the Mythic Arena! Read More »